Was BlackBerry’s CEO Right When He Said Tablets Will Be Dead in Five Years? 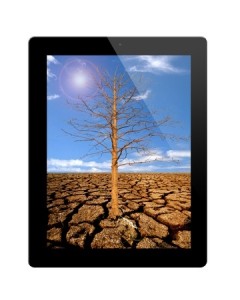 The CEO of BlackBerry, Thorstein Heins, made mention of a trend he believes will manifest within the next five years: the concept of a tablet will no longer exist. This sparked quite a bit of outrage and debate over the past few weeks as everyone – from tablet manufacturers to consumers – weighed in with their thoughts on the possibilities and validity of his statement. Regardless of opinion, it is a fairly observable phenomenon that certain devices and tech gadgets ultimately fade into oblivion as they are replaced by more efficient forms of gadgetry. Will this be the case for the tablet? We’ll address some of the reasons why this may or may not be the case below.

Currently, the tablet market has been experiencing a rapid increase in growth, thanks in large part to the increasing capability of these devices coupled with decreasing costs. Many industry experts agree that the growth in the tablet market appears to be on a sustainable course of growth, leaving many wondering just how such a trend could allow for the demise of the tablet in just a few years. With traditional desktop computer sales declining and smartphones not yet offering the same amount of versatility as many tablets, this would appear to be a good piece of evidence against Mr. Heins’ claims.

Many of us remember the days when buying a piece of software for a traditional computer was a hassle, mainly due to costs and having to physically find the software in a store in order to purchase it. The distribution model of software has since changed, with tablets being able to take advantage of apps just the same as smartphones. Traditional desktops are still limited in this regard, while many users will find pinging from iPads or other tablets to be much easier when it comes to finding the application they need – and for a better price in many cases.

On the other side of the argument, it can be considered that an ever-advancing amount of technology and computing power coupled with reductions in size will lead to smartphones being able to do everything that tablets are capable of within the next few years. As of right now, the biggest difference between many smartphones and tablets is the size of the screen: revolutions in flexible screen technology, however, may allow smartphones to compensate for this difference and become the item of choice for those currently pinging on iPads and other tablets.

If we consider all the elements currently at work, Mr. Heins’ claims that the tablet industry will be dead in five years seem a bit outlandish. With strong sales figures, increasing demand and flexibility not currently available in traditional desktop or mobile applications, the tablet is helping to fill an important niche in our everyday lives. While every form of technology ultimately becomes obsolete, there is no need to be tossing out your tablet just yet – expect many more years of this device being on the shelves and in our homes and offices.

Tags:
Blackberry CEOTabletsThorstein Heins
« P-Commerce – Do You Know What It Is?
Is Your Facebook Page Up-to-Date? Five Things to Monitor »
Share

Areas in Which SEO Remains the Same As Before
An Introvert’s Guide to Communicating Online
When Writer’s Block Sets In, How Can You Defeat It?