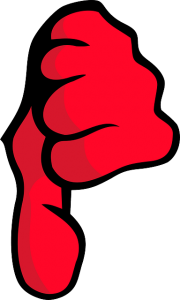 The world of social media and e-commerce is chronically affected by user input, word of mouth and suggestions. This trend has led to the need for an increased amount of positive feedback in order to satisfy specific audiences, worrying many brands and businesses that their online presences could be damaged by a couple of unsatisfied customers or a rogue competitor dead-set on mischief. While positive reviews are a critical component in the decision process for many consumers, a picture-perfect record is not necessary. Below, we’ll discuss a few ways in which negative reviews about your brand may not be so bad after all.

Consumers generally understand that mistakes are made and that there will always be a segment of people – “those customers” – who just cannot be satisfied. We live in a world in which imperfection is expected, and in fact, the presence of apparent perfection can throw up some red flags. Nobody expects a business to have a perfect five-star rating, so the mere presence of such a dynamic can actually make some people suspicious of the ratings as a whole. When users are pinging websites with negative reviews about your brand, do not be upset – this will provide a more realistic appearance of your brand and can actually build trust with consumers in comparison to an unrealistic, perfect rating.

Very few shoppers evaluate a brand on whether or not small number of negative reviews exist. Shoppers mostly have a pattern of evaluation that first assesses the number of overall reviews given and what the overall ranking comprises. They will then proceed to begin searching through each negative review to determine if there is a consistent pattern with a specific problem. If so, the shopper will then determine whether this is an issue for them specifically, or whether it is something they can handle. If there is no specific pattern in the type of complaint, then the shopper will often chalk this up to mere chance and individual personalities, and make their decision irrespective of the negative reviews.

Many review websites now have clout with search engines like Google and Bing, meaning that pinging websites with reviews – positive or negative alike – can help boost your overall ranking in SERPs. While a large number of negative reviews can harm your overall rankings (as search engines take into account both the number of reviews and the nature of them), a relatively small number of bad reviews will help boost the overall number of reviews received, making it more likely that your brand is viewed as a popular source for products and services. Search engines are striving to deliver content and sources to their users that will be received positively and that are relevant to their interests, so the more reviews in total that you have, the more likely Google and Bing will view you as popular!

Negative reviews can make us – and shoppers – cringe, but a few bad blurbs here and there is not the end of the world. Negative reviews can help assure shoppers that you are a legitimate brand and can simultaneously provide SEO benefit – so long as the large majority of reviews you’re receiving are positive ones!