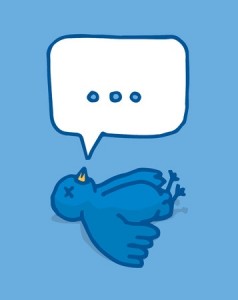 Twitter is used by people the world over to check news, talk to/stalk celebrities and just chat.  As the popularity of Twitter grows, brands and celebrities are trying to tap into the power of social media to make themselves appear more popular.  Sometimes this works, such as Lurpak and their brilliant Twitter account full of tweets designed to make the reader very, very hungry for something buttery and tasty.  Other brands and companies, however, have not been so successful.

When Amy Winehouse died, the internet was understandably full of people grieving and mourning the loss of talent.  Twitter was full of heartfelt tweets from celebrities and brands saying how her death was a loss to the music world.  Then there was Microsoft, who used her death to try and promote Zume software by encouraging fans to listen to her music through it.  It then had to back peddle furiously, posting condolences to Amy’s friends and family.

Then there was Russell Brand.  After he and Jonathan Ross left unkind messages on the answer phone of a beloved British actor Andrew Sachs, he was forced to leave the BBC and the BBC themselves were ordered to pay a huge fine.  Instead of being demure and accepting his punishment like a good boy, Russell used Twitter to fire off 140 character tirades against politicians who poured scorn on his actions and the company behind the fine.  Nothing like taking it like a man.

Sometimes companies just misjudge jokes, or try to link their self promotion to topical news stories with disastrous results.  Kenneth Cole tried to use the unrest in Egypt to boost sales of his Spring collection, Entenmann’s made light hearted use of the #notguilty hash tag when it related to Casey Anthony being acquitted of murder charges and Esquire tried to promote an article about oral sex by referencing Dominique Strauss-Kahn, who was arrested for sexually harassing a maid.  None of these went down particularly well with the general tweeting public.

Then there are some Twitter failures that you can’t directly blame on the brand or celebrity themselves, such as when an intern had a meltdown on their last day of placement at Marc Jacobs.  The intern posted multiple tweets bashing the environment he/she was working in and the superiors at the company.  Or when an employee at Chrysler had a severe attack of road rage and started tweeting swear words from the official account.

My favourite, however, is the story of James Andrews.  He, on the orders of his company Ketchum, arrived in Memphis to make a presentation on digital marketing to FedEx.  But when he got there he decided to tweet “True confession but I’m in one of those towns where I scratch my head and say ‘I would die if I had to live here!”.  This was read by a FedEx employee, who forwarded it to the management of both FedEx and Ketchum and wrote a long rant about Andrew’s and his lack of respect.  Oops.

Did You Know That Less Than 50% of Independent Restaurants Have Their Own Website?
Even More Methods for Drumming Up New Blog Post Ideas
How to Create A Professional Business Logo on a Budget