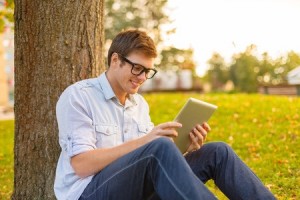 While we all know the iPad is great for productivity and organizing your life, anyone who owns one is likely to spend at least some of their time with it playing simple, casual games that help kill time when they are waiting for something.  They also give you another way to procrastinate when you are putting off doing some work! While there are many high end, graphics rich, complex games you can play on your iPad, some of the most addictive games are just basic, challenging word games, and a lot of these are available for free. If you are looking for the next game to get hooked on and waste time with, here are three fun free word games you can download.

Boy Howdy Technology who makes this game actually make a number of these ‘Jewels’ games, including Blackjack Jewels and Mahjong Jewels. This word game was the original, however, and this second version of it features a number of new modes that weren’t in the first version, as well as the classic Word Jewels game. In Word Jewels you basically have a grid of letters you have to form words out of, some of which will be red (these are the ‘Jewels’). You have to include the Jewels in your words to get rid of them, and you only have a limited number of moves to do this. As you move up through the levels you have more Jewels to get rid of and fewer moves to do it in. As with just about all word games, you also get points for using bonus letters (which appear as different coloured blocks) and for making words that are as long as possible, as well as for finishing a level with moves to spare. It is simple, addictive, and challenging without being ridiculously hard. It also works well, with no bugs or fails that I have noticed, except for repeatedly giving you the same ‘Achievement’ on every turn if you play it with your iPad offline, which isn’t that much of a problem. The game is free and there are no particularly distracting ads.

This game is preposterously addictive. In the normal mode (there are several modes available), you simply have to keep forming words out of letters in a ‘honeycomb’ type layout, getting points for using bonus tiles and making long words or special words like palindromes. You get bonus tiles on the game board if you do things like make three five letter words in a row, or create a word with three or more vowels in it and so on. There are actually a lot of ways to invoke bonuses, which makes you think carefully about all different kinds of words. If you are stuck you can shuffle the board, but this brings in a ‘timed tile’. If the timer runs out before you use this tile in a word, the game is over. There are fifty levels and it gets pretty intense when you are into the higher ones!

This game is incredibly simple. You have three rows of letters, and you just have to move the tiles around until you have three proper words. You can choose the difficulty (i.e. how long the words are), but even at the simplest level it is quite a challenging game that gives your brain a workout. While technically free there are a number of modes you need the paid version to unlock, but the free game will still keep you challenged and occupied for quite some time.

Tags:
AppsiPadWord Games
« How to Hide Webpages from Google
How Video Marketing Has Shot to Prominence in 2013 »
Share