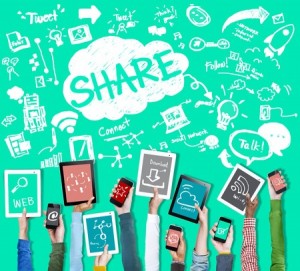 Whether you are publishing content on social media or on your website, there is ample benefit to the concept of sharing. The number one, underlying goal for most brands is to maximize their audience sizes and reach in order to persuade individuals, promote products or inform about an important cause. Some brands take it two steps too far with respect to promoting the concept of sharing, inevitably alienating readers and making them view each piece of content as a gimmick rather than a valuable contribution. We’ll discuss below a few ways in which you can boost shares without driving your readers crazy.

On your website, you have full control over where and whether sharing options exist. Many plug-ins for sites such as WordPress are available that can make this very simple, so why not add them today? At the top of the article, at the bottom of the article and even along the side, there are opportunities to cleverly add these options without overwhelming users with more intrusive elements (such as pop-ups and overlays). This will also provide the ability to track exactly who is sharing your content and to what social media networks (and beyond).

Don’t Forget About the Rest

Social media is often the go-to medium that people consider when the word “sharing” is mentioned, but there are other ways in which to share that you can promote. Email is one obviously major venue, and is perhaps the most universally used form of communication in today’s web-based world. Lesser-known social media websites or networks that serve as media promotion hubs – such as Reddit, Digg, and more – should also be promoted in your sharing solutions. Lastly, don’t forget to be pinging links to your content in pure HTML format that can be embedded in other blogs’ and websites’ posts.

Chronically asking for shares in every instance comes across as desperate and will be perceived, but the occasionally well-placed ask for a share works wonders. This basic call to action can be inserted into most blog posts near the end, and can also be occasionally used on social media when pinging links via Facebook, Twitter and more. Ideally, it is best when the ask is in a more passive state (such as being included in an article) than being prominently featured in a tweet or Facebook post preceding an article.

Give ‘Em What They Want

People on social media and the web in general prefer multimedia-rich content. When they find something beautiful, easy to digest, entertaining or informative, they will share at rates much higher than they will with anything else. As such, be sure to use a variety of pictures, photos, infographics and videos to augment the likelihood of sharing in a non-intrusive capacity. People will just organically be compelled to share these types of posts and pages – even without a subtle reminder to do so – when they resonate as described by one of the aforementioned characteristics. Social media and web sharing in general is about making a point quickly: images, videos and infographics tend to do that better than pure text.