LinkedIn Ads – The Pros and Cons 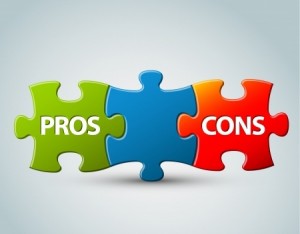 The buzz around LinkedIn’s advertising options have been gaining an increased amount of attention lately as it – along with many other social networks’ advertising programs – has become the largest revenue source for the company. While some debate as to the effectiveness of online advertising via social networks, it is a constantly growing business model that many companies find profound benefit in using. LinkedIn’s model is a tad different than other popular advertising platforms featured on Facebook and Twitter, so we will explore both the advantages and disadvantages of LinkedIn’s offerings to give you an idea of whether it is right for you.

Due to the dynamic of LinkedIn, most people using the social network are business professionals. This makes advertising to other businesses a great way to develop business to business relationships and interactions. In fact, there probably is no better platform currently available through which such a wide array of business-minded individuals can be reached through advertising. Within this group of users, many of them are listed as decision makers; by targeting these select individuals with your advertising, you are far more likely to find new clients and business than on other social networking sites.

There is also quite a bit of business diversity on LinkedIn, with companies hailing from virtually every country in the world. Those seeking to diversify their business clout will find a market that is both receptive and abundant on the website; pinging domains like LinkedIn with ads specifically targeted for business have been shown to have up to 300% more success in terms of conversions than on other social networks such as Facebook. LinkedIn also offers the ability for each advertising campaign to be specifically targeted to any demographic; whether you are wishing to reach young professionals in a particular metropolitan area or a specific type of employee, its sophisticated filtering options allow you to do so.

One of the biggest drawbacks to using LinkedIn’s advertising platform is the abysmal click through rate; on LinkedIn, expect only 1 in 500 impressions to result in a click, compared to 1 in 250 on Facebook and 1 in 100 on Twitter. Still, this is made up for by the higher conversion rates discussed above. The time period in which it is best to start an advertising campaign on LinkedIn is also different than on other sites; usually, activity peaks around mid-week and decreases rapidly until the following Monday.

The cost of running an advertising campaign is also much more expensive than it is on other social networking sites. For pinging domains via LinkedIn, expect to pay anywhere from one to three dollars per click. The difference between LinkedIn and other advertising portals, however, is that you are directly reaching a business to business audience, meaning that those who do click on your advertisement are far more likely to be interested in its offerings and therefore much more likely to engage with your business. Ultimately, your business model should take this into account, resulting in an advertising campaign that pays for itself.

Tags:
LinkedInLinkedIn Ads
« Four Mistakes Any SEO Pro Can Miss
Three Things You Must Do When Marketing Content »
Share