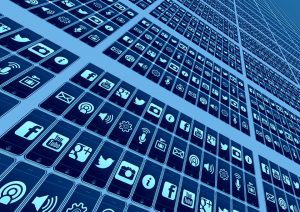 With social networking apps being created pretty much on a daily basis it can be pretty tough for businesses to decide which ones are best for them to use. Obviously your business wants to engage with the biggest number of potential customers at a time, and unfortunately there is no one-size-fits all app. Instead, it’s wise to use a few different social networking apps, and update and post on them on a regular basis. So what are the best ones? Here’s a closer look.

The reason we have listed this one first is because, let’s face it, Facebook still a leader in social networking. It’s hard to engage with this many people at one time on any other social networking platform. As of right now, it is estimated that Facebook has about 1.11 billion people with accounts. Just think about that number and really let it set in. Can you afford NOT to have a Facebook page for your business – absolutely not. Another interesting stat is that per week there are about 645 million local business page views. That is something you could be part of.

This is another giant that has been around for a while now and just so happens to be the second biggest search engine out there! It is estimated that around one billion people visit it monthly. You can upload YouTube videos, start your own channel, and really start reaching customers you never thought would have been possible. It also shows that you are up on the current technology and social trends.

This social networking app is a bit more specialized in that it may not be the best app for all businesses. This app allows you to post photos, so if you sell products such as clothing, accessories, furniture, etc. Pinterest could be a great option. It’s a visual approach that users love. They can quickly go on to Pinterest and instantly find ideas, inspirations, and great finds. Keep in mind that the majority of people who are using Pinterest are between the ages of 25-45, so again it’s quite specific.

Twitter gives you the ability to post text, videos, photos, and links giving you lots of versatility as a business owner. It is estimated that there are about 215 million users, so again you’re hitting a very large audience. The thing about Twitter is that it’s all meant to be quick snippets, so this isn’t the place to be placing long blogs and heavy amounts of text.

Again, this one is similar to Pinterest in that it’s got a more specific audience. The average age of users is 18 to 29 year olds, so if this isn’t your target audience the platform probably doesn’t make sense. Instagram is another visual platform, as you will be able to post photos and videos.

Think Through Your Decision

Before you start to set up any social media accounts it’s important to first determine who your audience is, what their interests and habits are, and think about the messages you want to be putting out there. This will help you figure out which app is best for you.